Ende Gelände: “Here, and no further���

Germany has been always the first country to take the lead on worldwide climate issues, such as the implementation of  clean energy policies. Nevertheless, Germany is still struggling to make its energy transition a success. Four of Europe���s five largest emitters are German lignite power plants and coal accounts for one-third of the country’s greenhouse gas emissions. World governments have agreed to limit average temperature rise to 2°C above pre-industrial levels, but around half of that warming has already happened.Scientists calculate 89% of Europe’s coal reserves need to stay in the ground to keep to the 2C threshold. Yet Germany remains reliant on coal for more than 40% of its power generation.

Sigmar Gabriel, Federal Minister for economic affairs and energy, delivered a proposal of a climate levy to reduce emissions from the most polluting coal power plants, which are primarily owned by RWE and Vattenfall.

“RWE’s coalfields in the Rhineland are the biggest source of CO2 emissions in Europe. “

The environmental community knows Germany’s need to wean economies of fossil fuels to tackle global warming. Public support for a coal phase out has never been stronger, an opinion poll showed that 81% of the people want a coal phaseout by 2040 at the latest.

In Summer of 2015, the European anti-coal movement took the fight against coal industry to a higher level. A coalition of grassroots groups and NGOs called for a mass act of civil disobedience from August 14 to 16, under the banner Ende Gelände, which translates into ‘Here, and no further’.

They blocked the mining infrastructure and brought operations in the Rhineland coalfields to a halt. Hundreds of people from across Europe entered to an open-pit lignite mine to stop the diggers, with many more people standing outside the mine in solidarity. The Bagger 288 machines in the Rhineland���s coalfields are 220 metres long and can excavate 240,000 tonnes of coal a day, and at least four out of five massive diggers were brought to a halt as the activists entered the site.

This action was part of a growing and diverse movement against lignite mining, ranging from local citizens’ initiatives against air pollution, to fights for divestment and the occupation of the old-growth forest “Hambacher Forst” that stands to be cleared for the extension of the mines. This year their fight will go international. Break Free from May 4th- May 16th, with massive disobedience actions against fossil fuels all around the world.

Check out the highlights Ende Gelände’s first action and their inspiring stories: 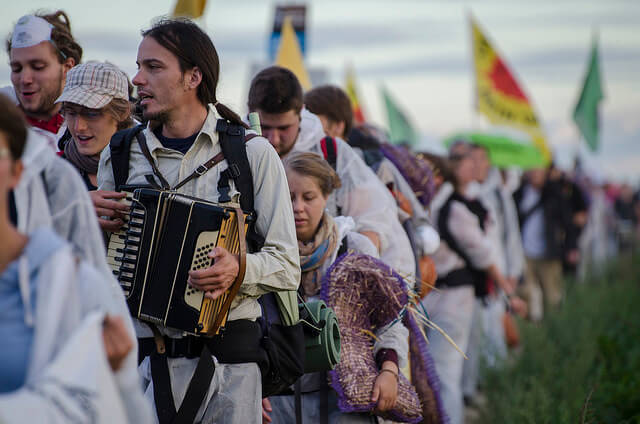 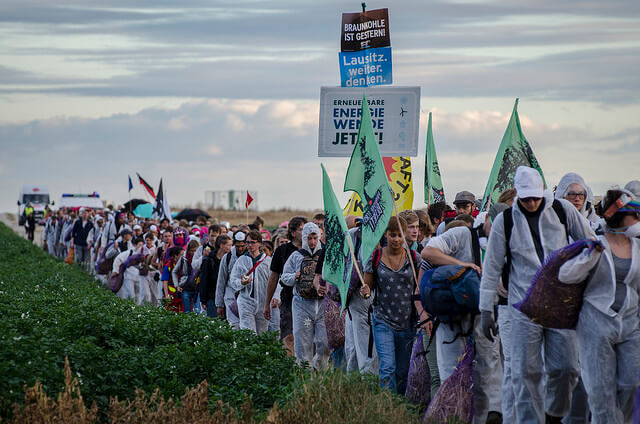 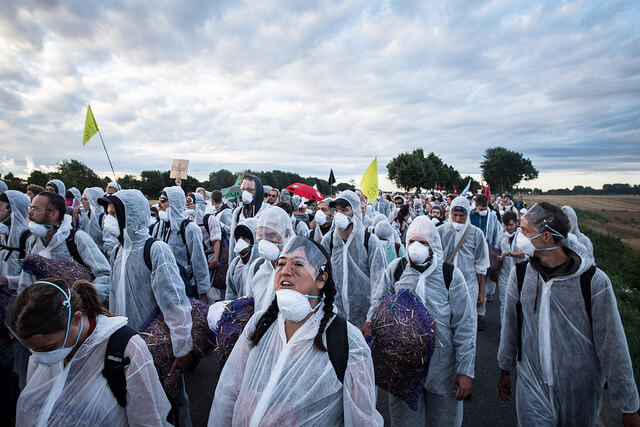 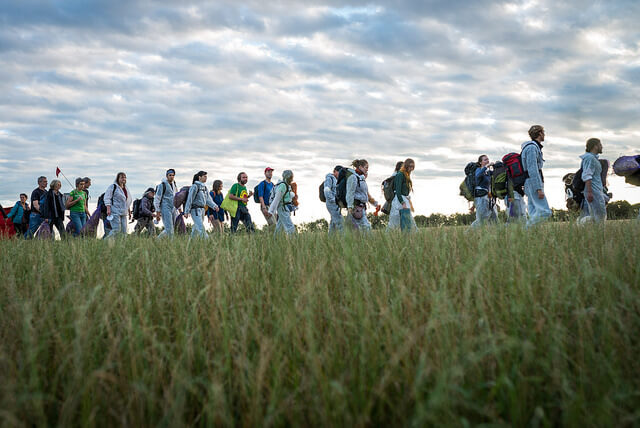 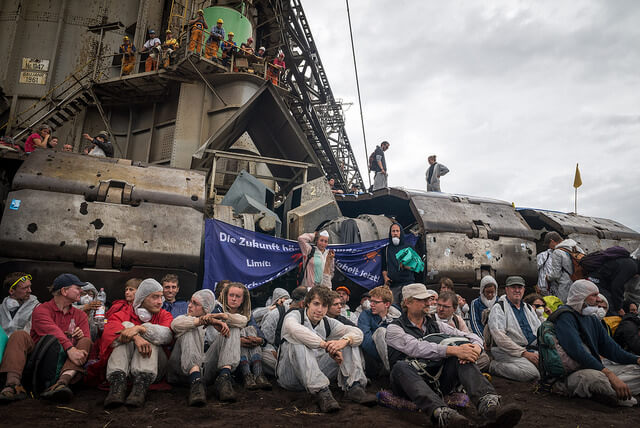 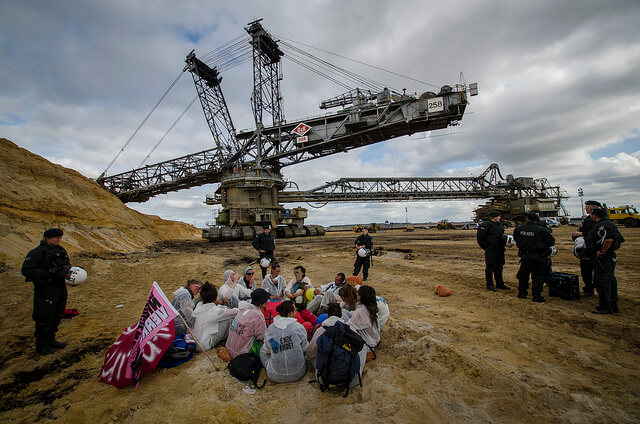 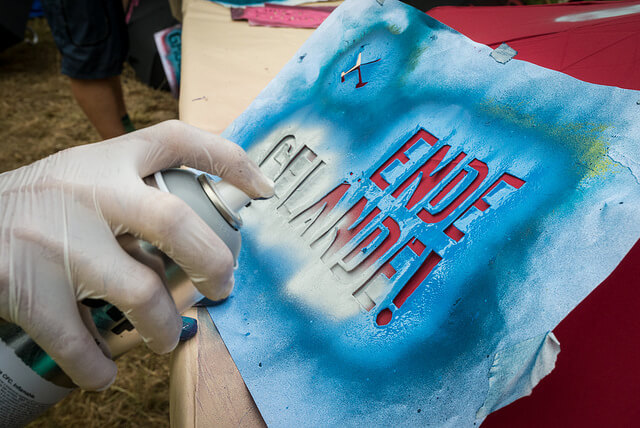 Defenders get arrested and locked up in jail.

“If you���re against coal mining, why don’t you just walk into a coal mine and stop the excavators?”

More than 1,000 activists got into coalfields in Germany. Setting off from a camp before 7am, they split into “fingers” and entered the RWE opencast lignite (brown coal) mine from different directions.
In white overalls emblazoned with Ende Gelaende, the protesters targeted the site as one of Europe’s biggest sources of greenhouse gas emissions that drive climate change.
The activists brought the gigantic machinery of lignite coal mining, owned by RWE, to a standstill for several hours at a number of locations. Their actions put the spotlight on the greatest environmental hazard of our time: the threat to the world climate by CO2 emissions and the impact of lignite-fuelled power generation in this context. 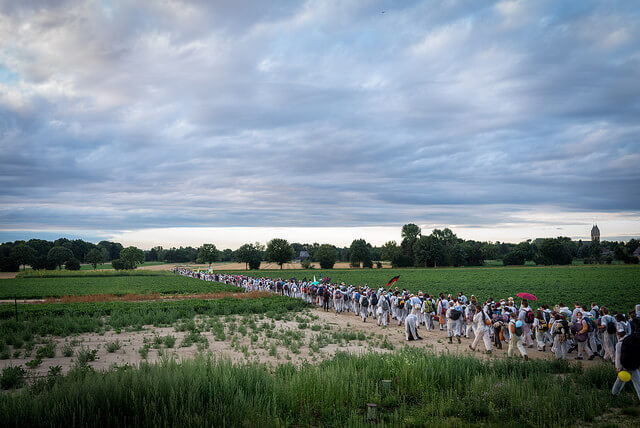 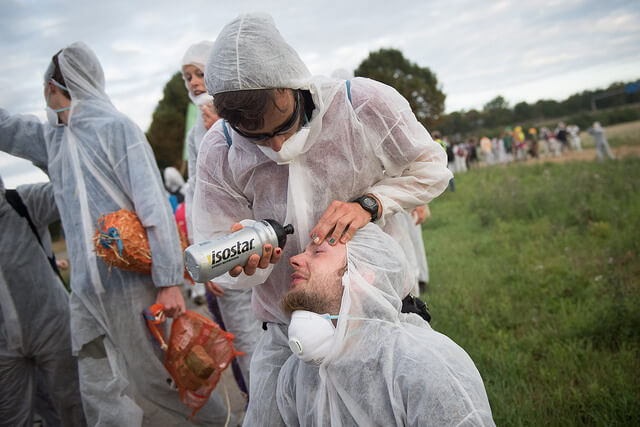 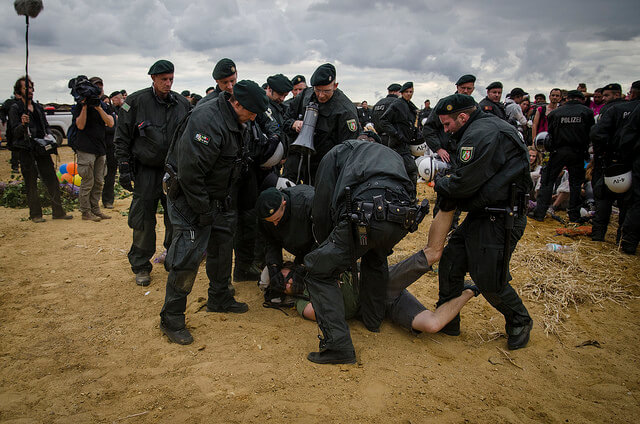 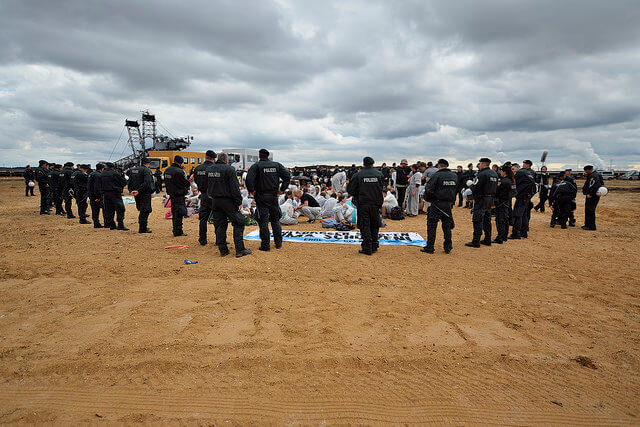 During the action in Rhinelands, the protesters presence was matched by 1,200 police officers, who used pepper spray, batons and teargas to try and stop protesters.
Police detained 240 protesters, releasing them the same evening.
A spokesperson for RWE said the company was considering legal steps against some of the protesters for trespassing, but could not confirm how many. “The police will determine which violations of law have been committed. RWE will check how we will take legal actions against the relevant offenders.”
It was ironic that RWE, a corporation whose coal excavators have for decades disturbed the peace of not only individual households, but entire villages and regions – even going so far as to destroy houses – criticized the actions of the several hundred demonstrators, who hiked across a landscape devastated by the corporation���s machinery.

After the actions in Rhinelands, and the Conference in Paris (COP21), this coalition of anti-coal movement,s groups and NGO’s decided to take this action to a higher level.

BreakFree2016 from May 4-15, 2016:
A global wave of mass actions targeting the world�����s most dangerous fossil fuel projects, in order to keep coal, oil and gas in the ground and accelerate the just transition to 100% renewable energy.

Across the world, people are showing the courage to confront polluters where they are most powerful — from the halls of power to the wells and mines themselves.

Visit BreakFree2016.org and join the actions in your country!!

People around the world are supporting in many ways to this global Fossil Fuels Resistance movements!
And here is a very good way to not only support them but to share their fights! Let’s tell the world to #KeepItInTheGround
Join the Climate Strike‘s #ThankYou campaign!
And say Thank You in very own and creative way to the people that are risking their lives to save our future.

Tell the Ende Gelände participants how grateful you are!

Send your #ThankYou messages, Pictures and videos to : [email protected]