Paris was a historic step on the way – yet we are still on the path towards climate chaos.

Many threads met in Paris. Many futures are possible. Let us try to unravel the threads to find the ones that can lead us into the future we want.

1. What was all the cheering about?

1. For the first time, all governments have agreed to limit global warming to “well below 2 degrees” above preindustrial and trying to stay below 1.5 degrees. This makes much sense, because at 1 degree warming today we are already seeing very heavy impacts. Beyond 2 degrees the danger of run-away climate change (self-reinforcing warming through melting permafrost and methane from the seafloor, dying forests etc.) is very apparent. Run-away climate change is another way of saying climate disaster, because it will not stop until the Earth is about 8 degrees or so warmer than today – and most species alive today have gone extinct, possibly also the human race. 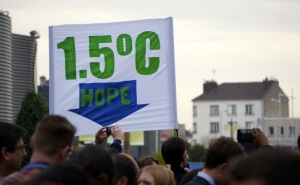 2. For the first time, all governments have agreed that we should achieve net zero emissions in the second half of the century. Although the wording is a bit tricky, this is interpreted by many as a deadline for fossil fuels. 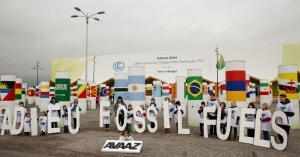 3. For the first time, all governments have agreed to review commitments every 5 years and that ambition can only increase each time.

These three things are the main reason for the cheering and celebrating. If you would like to read the full text of the Paris Agreement, click here.

2. Why are we still heading towards disaster?

The commitments are mostly for the period 2020 to 2030. As recognized in the very text, they do NOT add up to limiting warming to the established target. While 1.5 degrees and “well below 2 degrees” is good, it is worth nothing without implementation.

And there is one “little” problem: while governments do have emissions reduction commitments on paper, in practice ALL of them are pushing ahead with their coal, oil and gas extraction plans as if there was no climate change. We have five times the fossil reserves needed to break the 2-degree-mark. And governments as of today are planning to extract and burn all of those reserves. And they spend more public money on looking for more (additional) fossils than they spend on the Green Climate Fund. This puts the toothless 1.5 degree goal into perspective. With the level of fossil fuel extraction we are seeing today, we will have passed 1.5 degrees of warming before 2030 – the end of the first commitment period under the Paris Agreement.

And because fossil fuel extraction is not included – in fact it is never even mentioned – do not expect governments to feel automatically obliged to do anything about fossil extraction! In fact, a LINGO analysis shows that the biggest extraction sectors in the world will continue to grow bigger over the next 15 years – if the Paris Agreement gets implemented and nothing more. This means that WE have to step in and peak emissions “manually”!
You may have heard the figure that the commitments by governments add up to 2.7 to 3.7 degrees of warming. Don’t let these numbers fool you. As mentioned above, there is a tipping point in the Earth’s climate system somewhere. Once we are over, warming increases by itself. 3 degrees is just a waypost on the slippery slope to climate hell.
And please also don’t be fooled by people saying “this is the carbon budget for 1.5/2 degrees” – the devil is in the details of probability: if you accept a 50/50 gamble on a liveable future, we still have a little “atmospheric space” to fill with CO2 from burning fossils. If you want 90% certainty not to go over the target, then we are already “over budget”! The iconic figure of 350 ppm of atmospheric CO2 can serve as a guidance. This has been called the “safe limit” for global CO2 levels. Where are we now? Over 400 ppm. Getting back into the safe operating space of our home planet takes ending the nasty habit of burning coal, oil and gas altogether and growing forests and soils to capture carbon back from the atmosphere.

3. The Paris Agreement: a bag of poison for our future.

A mechanism to address loss and damage was a priority for many vulnerable countries in Paris, because the most vulnerable are already dying from climate change. While a working group to set up such a mechanism is mentioned in the text and will continue to work, the Paris Agreement makes explicit that there would be no compensation nor liability of polluters for the damage they cause. This ruthless clause is an indicator of how the United States and others are trying to protect their corporations from facing the truth that criminal liability is already on the cards. 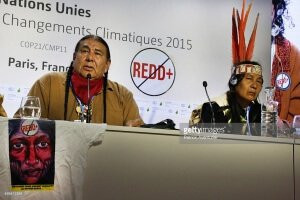 Financial commitments are vague at best. Aviation and shipping are not included in the Agreement. Nor are military budgets which could provide ample resources for the clean energy transition and addressing loss and damage if they were reallocated. Fossil fuel subsidies are not even mentioned! This speaks of the power of the fossil industry to dictate the terms.

The false solutions of carbon trading and REDD+ are enabled by the Paris Agreement and will subsequently have to be fought on the ground in each place where their negative impacts appear.

Governments have said they want to stay below 1.5º warming, but provide no means to achieve it. We can take them by their word and peak emissions through actions on limiting fossil fuel extraction. I call this “forced peaking”. Civil society organizations are already getting ready for the first round in May 2016. Demands to ban fracking globally, a moratorium on new coal mines, a demand to stop fossil fuel extraction in indigenous territories and protected areas, a moratorium on fossil fuel exploration and many more initiatives are underway. It is the task of our generation to shut all coal mines, oil and gas wells in our lifetimes. The sooner the better. Ending the fossil age is manual work! Fortunately shutting a coal mine takes only a handful of people, voluntarily ending coal consumption would take millions. And it doesn’t work. And if it did work, it would lead to the coal getting exported instead (just look at US plans to export coal, oil and gas). This is a hint to not get too tied up in the “personal responsibility thing”. There are big enemies to fight. These Goliaths can be defeated by us Davids – and they must be.

There are a number of game changers that could help break the fossil industry’s business model of toasting the planet. All of them need to be scaled up.

And there is hope in the clean energy transition: as soon as 2030 electricity generation from fossil fuels and the gasoline-fired car may be history! There will still be large sectors left (industry, shipping, aviation, agriculture), but the shockwaves will help us shut down more mines and wells. So let’s get on with the energy transition to 100% clean energy!

In the meantime, we must look after our more vulnerable brothers and sisters and stand together as a human family whenever one of its members needs us.

Copyright, Climate Strike. - Please share with Attributes
Back To Top
×